The travel day starts like most with a sleep deprived 5am shuttle ride to the airport. Two couples sit across from each other, the broads are yammering away about their friends wedding and their husbands stare at each other hoping the warm sensation of death will one day wash over them. The conversation morphs into the TSA and how they were unable to bring aboard an expensive bottle of wine on their last work trip. I want them dead. Sorry this is me at 5am on zero sleep with two planes to catch as I make my way from Austin TX to Toronto Ontario Canada for two sold out shows for The Ronnie Mund Block Party.A three hour layover in Houston allows me a unique opportunity to see Canadian’s up close and now were packed like a Mardis Gras Paddy Wagon on our way up to the Great White North. In my 15 years of doing shows in Canada this is the first time I’m working legally and showing up with an actual work Visa and since the biggest hurdle for the weekend is getting into Canada I’m on my best behavior.The line into customs moves quickly and within 10 minutes I’m going through the border agents where I’m directed to head through to another waiting area with armed guards that I can only describe as an airport version of a DMV. They take my passport, my work papers and tell me to sit down. The room is bleak and I get that uneasy feeling one of these doors leads to a room where they could make you disappear if they needed to. After a half hour our promoter shows up and pays the money to get me into Canada and relieved I head to baggage claim where my exit to freedom is blocked by a 700 person line through two more guards to actually leave the airport.

Add to the aggravation of the line I gotta stare at this fat guys ass crack eat his pants and the middle eastern guy who felt his spit behind me actually involved constantly touching me and breathing down my neck. 30 more minutes I’m free and being driven to the venue in Mississauga which is large (740k pop) suburb of Toronto.
The venue is Blue Suede Sues in Mississauga and it’s primarily a dance club and not at all laid out for comedy. It was comedy in the round, no real focal point and the lay out and decor was wild. Imagine Graceland if it was decorated by Spencer’s Gifts meets a fat goth girls bedroom and enough black and white tile you’d think we were performing at the Peach Pit on Beverly Hills 90210. Put it this way, if they would’ve approached Quentin Tarantino to use it for Pulp Fiction he would’ve said “Perfect but let’s dial it back by 95%”.
The venue owner was a great guy and assured me the place was perfect and Rob Bass had performed there. I told him doing comedy to 350 crazed Stern fans who professionally heckle was not the same as a rehashed 90s hip hop concert for 40 year old white people. 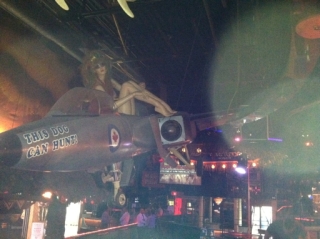 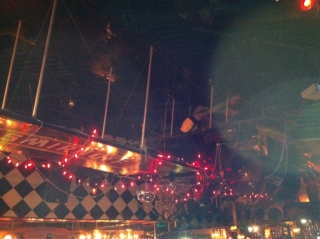 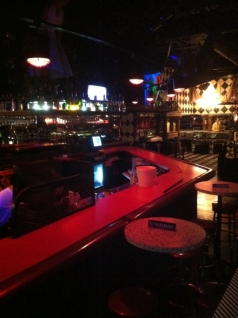 After a mic check and some tweaks we were ready to go and they popped the doors and the fans poured in. Ronnie, Shuli, Maddog Mattern and the man of the hour JD Harmeyer finally made their way in having also battled security, customs, flight delays, Friday evening Toronto traffic and jet lag.
The energy was hot and the fans were ready for a wild ride.
JD came out to thunderous applause followed by an enormous “FUCK SCOTT!” chant that erupted and bellowed through out the venue. The fans had the tiny stage surrounded and were thoroughly entertained by the comedy of myself, Maddog and Shuli. Ronnie had no shortage of Hot Chicks and at one point had four women up on the stripper pole while JD held court from the other stage.
Canada has some die hard Stern Fans and we brought out some local celebrities including a gentleman known as “The Cash Man” who presented Ronnie with a Sterling silver Tiffany Rattle to give to Scott The Engineer for being a baby and quitting the Block Party.
It’s a $500 rattle!!! FUCK even when he’s not here and not doing anything that bald fuck made more money.
So despite my concerns for the venue, the show went off without a hitch and based on the reviews and photos from twitter the fans were more than pleased with the show.

Ronnie, Shuli and JD with the owner of the venue who is a big fan and a great dude! 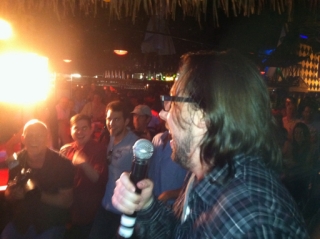 Not only were there a lot of hot chicks one fan in particular came up onstage and revealed her natural rack selection to the delight of the fans and while I do have the video, this blog prevents the posting of nudity but look to upcoming content from Howard TV where not only will you see this top notch rack but better footage of Dabadass JD Harmeyer delivering a solid lip lock to a standing ovation! 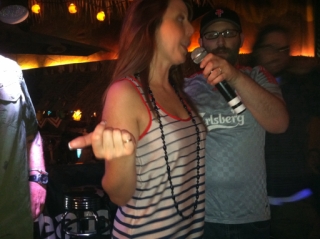 And how to round out a night of partying with the Ronnie Mund Block Party?Well if you’re touring with Maddog Mattern and he can’t sleep unless he’s hopped up on St. John’s Wort and enough melatonin to put someone to sleep faster than a Gary story, you hit up the local Walmart, which is just like American Walmarts except everyone is in shape and has health care. 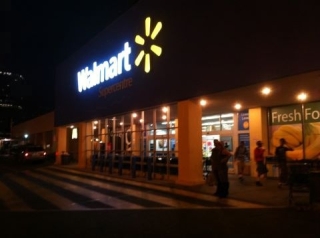 Saturday brought a full schedule to the four regulars that including interviews with askmen.com , The Naked News, an Eat and Greet, a photo shoot and a private fan dinner and with a full schedule like that, the only way to travel is by party bus.

The Eat and Greet was at Jack’s Backyard and the fans were fed a wide variety of BBQ and from Noon to 3pm the booze was flowing and people were getting to meet the Block Party Tour members and even Hanzi the gentleman known for his conspiracy filled phone call rants to Howard was in attendance. 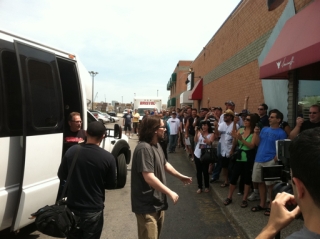 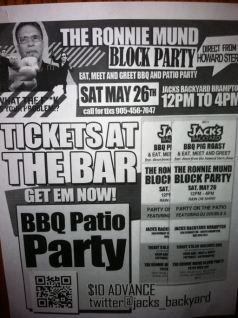 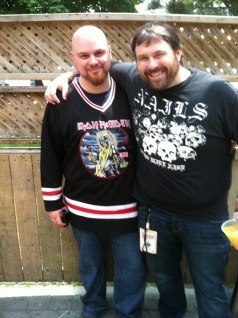 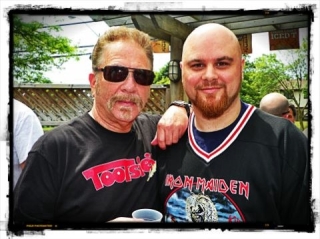 This guy not only showed up rocking a Maiden Jersey, he also won a $200 drawing and when he told me he wasn’t able to get tickets for that nights Block Party because it was Sold Out, I scored some free passes for he and his wife. Up The Irons! Metal Heads should always take care of Metal Heads. 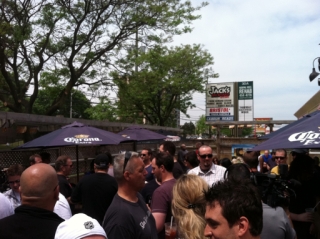 Inside of the bar was one of those prove your manhood punching bag games and with the fans piled in and Howard TV watching we had a box off. I had cheated by practicing twice and rocking a 760 out of possible 999 so I felt like I had the contest won.One by one we all took our swings as the crowd cheered.JD went, then Maddog, then Ronnie, myself and finally the headliner Shuli. With my lackluster bag missing 452 as the score to beat, Shuli stepped up.Someone yelled out “Pretend it’s Scott’s face!” and that’s all Shuli needed and he landed a serious haymaker and scored a 666. The place went berserk and as Maiden Fans Shuli and I are were even more stoked.Final TallyJD 350Maddog 425Ronnie 448John 452Shuli 666One fan after the contest stepped up and banged out a 905 , his fist was like a truck and I thought I was watching early clips of a you g Clubber Lang training montage from Rocky III. 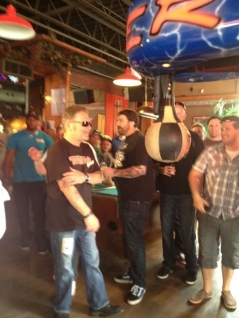 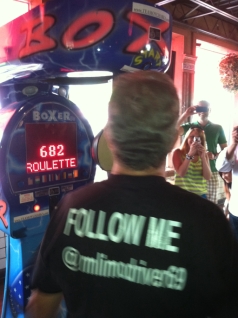 After the eat and greet we headed over to the venue and started our photo shoot for content for the upcoming Block Party Site, Ronnie Mund Jamaican Get A Way site and photographer David Leyes was there to capture our good looks and during our down time we were able to rest and catch up with twitter. 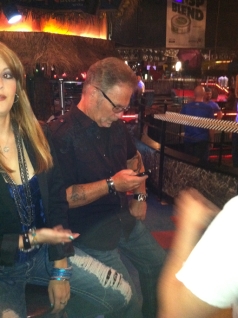 After the photo shoot the gentlemen and huge Stern Fans Stewart and Derrick who had provided our party bus took us and about 20 other folks to an amazing steak house. They were awesome dudes and it was a great start to a wild night. 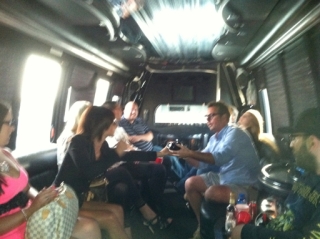 The Show that night was stellar, Ronnie had Rachelle Wild from the Naked News up with on stage, Shuli got a woman in her 50s ? to also dance, Maddog and I killed and the fans were loud and out of control. The highlight to me was Hanzi and Ronnie arm wrestling and by all accounts and in this reporters humble opinion Hanzi won. However , Hanzi outweighs Ronbo by atleast 100 lbs, he’s 30 years younger and bit less crazy so it wasn’t really fair to begin with. 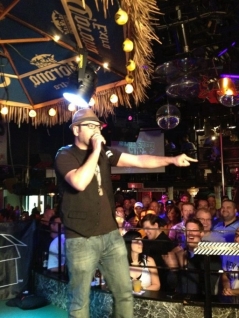 Let’s take a break in the blog action and have Maddog Mattern himself break down the Canada trip.Things that make Canada awesome!!!!1) everyone there is super friendly but at the same time rugged. Like they would kick your ass but then ask if there is anything around the house they can help you with. 2) it’s incredibly clean. No garbage,homeless or junkies soiling the streets. It’s so clean I’m convinced that std’s in Canada make one healthier. Catch clap in Toronto and it makes your eyesight better. It’s like eating carrots but more fun.3) if you don’t drink all the time you are a walking vag. And the first people to call ya that are women. Canadians drink all the time and handle there booze like a professional. Know one got out of hand yet everyone was drinking since the last time the Leafs made the finals. At the meet and great a woman who was a school teacher called me a pussy for drinking coffee at noon. She then pounded three shots and four beers like she was Quinn in “Jaws. She would of stayed and drank more but she had to prepare a lesson for Monday on plate tectonics. Forget hockey drinking is the national past time!!!4) hottest black girls ever!!! In the states we are convinced there are not many black folks in Canada. Well this is a great secret. I looked into the crowd Saturday and saw a bunch of dark skinned angels that would make a neo/nazi consider a career change. And all these sirens could drink anyone under the table!!! To quote Yakoff Smirnoff (That’s right you read that correctly. A Yakoff Smirnoff reference. What you gonna do about it?) WHAT A COUNTRY!!!!!!We love Maddog and he has been a huge addition to the tour. Follow him on twitter @maddogmattern 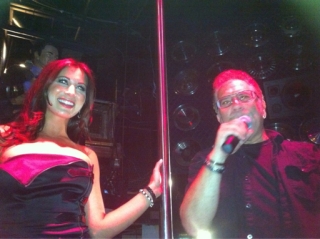 After the show we took pics with the fans, signed stuff and went out for some late night strip club antics.For Strip Club Audio and an interview with Hanzi check out the new episode of John Tole’s America Podcast We finished the night with some friends and fans at Denny’s where Shuli devoured a Grandslamwich. 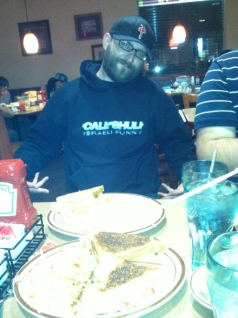 A quick toast and a huge Thank you to Jerry our Canadian promoter, everyone at Blue Suede Sue’s, Stewart and Derrick for the food, bus and strip club VIP experience, to Rachelle Wild from the Naked News, Peter from Askmen, Hanzi, Jacks Backyard, Jeff Bellamy from Prime Web Design, David Leyes, Dan from Cleanbox Entertainment and all the incredible Howard Stern Fans who made it a memorable weekend. Up nextLong Island, New Jersey and Providence in June.Tickets and information is available at Cleanboxentertainment.comFollow us all on twitter if you aren’t Already@rmlimodriver69@shalomshuli@jdharm@maddogmattern@johntole
See you guys on the road!
John Tole
5/31/12
johntole.net 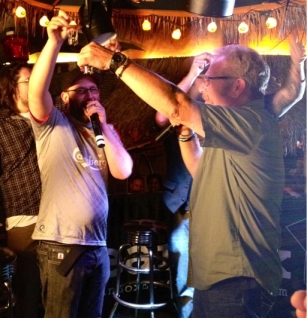 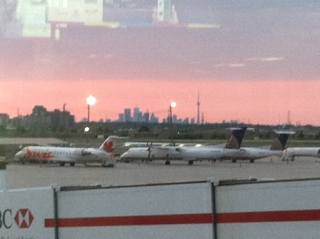 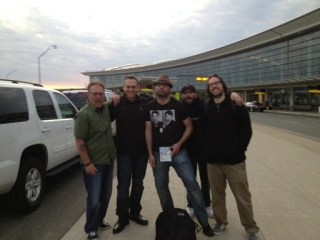 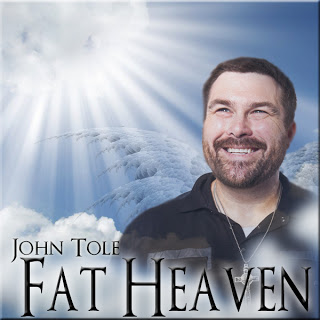 Whiskey and The Surfer